My thoughts on petitions and single issues 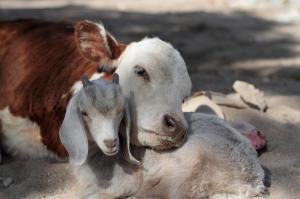 I started today reading yet another article claiming that those who oppose all animal use are against alleviating suffering now in favour of promoting what some contemptuously label ‘abolitionist theory’. This of course could not be further from the truth. Once again, I struggle for a way to explain, because I know it seems counter intuitive to some to refuse to promote single issue campaigns and petitions as I do.

I’m going to stick my neck out here. There are those (and many of them are not even vegan) whose choice of activism is sharing petitions and donating to death-industry-partnering organisations that claim to champion the interests of other animals. For a vegan, many report that it makes them ‘feel I’m doing something now’ and for the non vegan ‘activists’ (and I was once one of these once) it makes you feel that you’re ‘doing your bit’, ‘making ethical choices’ and ‘being humane’.

In fact – again speaking from experience – it actually serves to make you more comfortable about the harm you are continuing to cause in your everyday life. But vegan or nonvegan, these efforts are doing nothing to change the prevailing cultural view of nonhumans as our property. It’s a treadmill, it’s never ending.

And before I get the usual howls of indignation – I’m not judging anyone at all. In fact I’m talking from personal experience and trying to share a few hard-learned lessons.

So if I were walking down the street and I saw a nonhuman I could help on the spot – would I? Well of course I would. But the point is that no matter how  much we care – and I care enough to think about nonhumans every waking moment and in my sleep as well – no matter how much we care, we cannot save them all. And it would be ludicrous to try.  I live near a chicken ‘processing’ plant – one of countless death factories across the world. Trucks laden with these gentle and helpless innocents shuttle in, all day every day, timed like aircraft in a holding pattern, waiting for their appointed slot to deliver their helpless cargoes into a new kind of hell from the one where they were raised.  Although I wish I could, I couldn’t save them all, even if I had money which I don’t.

Oh yes, I know that there’s always several people who will cite as ‘proof’ of their effectiveness the fact that this or that campaign /petition increased their awareness and resulted in them becoming vegan. I can’t deny that in the early days, single issues raised my own awareness too, but no-one told me I had to be vegan.

If I could ever be accused of being an ‘angry vegan’, it would be because of that fact. I was taken along for the ride on the never ending fundraising rollercoaster, by groups that I now realise do not want a vegan world because on the day that happens, their executives will have to find their salaries elsewhere. All I needed to help me see the light was education. I needed to be told that I had to be vegan and then suddenly it all made sense.

So why will single issues and petitions change nothing? I’ve tried to think of an analogy and this is the best I can come up with.

Imagine, if you will, that the accepted cultural norm or paradigm of nonhuman exploitation is a tap that’s turned on full. The tap is on full with the water flow representing the majority of humans who consider that exploitation of all other beings is acceptable; it occurs in as many grim and horrifying ways as our inventive species can imagine; and they refuse to change or are simply unaware of their participation in the nightmare. Picture the water from the tap flowing into a sieve. Each hole in that sieve is a ‘single issue’.

Each time a ‘single issue’ is addressed, the range of the ‘victory’ is limited. An agreement is obtained to increase cage sizes in a few years; one or two airlines agree not to transport beings for vivisection; a limit is put on the transport time for beings being taken to their deaths, etc.  No one can deny however that some issues – some – result in small changes to the treatment of nonhumans. (note – we’re talking about treatment here, not use). However, let’s be unrealistically positive and suppose that with each ‘victory’ a hole in that sieve is closed up. The water still flows just as strongly because most humans still think exploitation is acceptable – that has not changed. The water just finds new routes to travel in the same way that exploitation continues in a slightly changed direction.

What abolitionism seeks to do is turn off the tap. Think about it. If we could turn off the tap by educating that veganism is the only morally acceptable response to the recognition of nonhumans as moral persons, then the holes in the sieve are no longer relevant. The water has ceased to flow and every single issue has been addressed.

For every new vegan created, that tap is turned off a tiny fraction. I have a choice, as we all do. I can try to educate others about why they need to be vegan and work at turning off the tap. Or I can join the hole pluggers round the sieve. I choose the tap. Please be vegan.

Veganism will change the world. http://vegankit.com/

9 Responses to My thoughts on petitions and single issues