Dealing with the nightmare 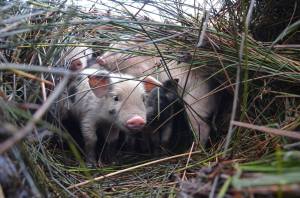 I was first introduced to images of animal suffering through mail drops by animal welfare organisations. They use such images as a tool to trigger a vague and unresolved sense of guilt in order to gather donations and the word vegan is never mentioned as a necessity. Why would it be? For any business that makes their income from the exploitation of nonhuman individuals, of course they don’t mention veganism. Why? Because veganism marks the end of their business venture.

The unspoken dialogue that the images suggest, and this is true not only of animal welfare groups, but of other charities too, goes along the lines of, ‘ Look at this. Isn’t it shocking? Give us money and then leave it with us to make it stop.’ Really, if we examine that concept a bit more closely, it begs far too many questions. But it’s very effective. I know it is because before I was vegan, I fell for it. I bought their absolution and committed myself to the ‘happy exploitation’, ‘feel good’ labels that seemed to be what was required of my end of the bargain.

Taken for a ride

I could rant about how I felt about that once the vegan message actually hit me, once I realised I’d been well and truly ‘had’,  but I won’t. It’s something we each have to discover for ourselves and not always the moment we decide to become vegan – it took me quite a while.  However, along with being vegan can come an urge to think critically about the reasons why we ourselves were so blind for so long. We have to open our eyes to the way we have all been manipulated, soft targets because of the uneasy conscience most of us had about animal use. Very easy targets because we all knew on some level that we were reluctant to examine our actions or motives too closely, so donating our way back to feeling conscientious was just too good a chance to miss. It certainly made me feel ‘ethical’ and – astonishingly – I even thought of myself as having concern for animals!

To understand how to move forward in our lives, and help others make the connections for themselves, we must each honestly examine what made us blind in the past.

There are many horrors that appear regularly in the newsfeed of our social media pages and they are all the stuff of nightmares. From images of sickening harm done to individuals or groups of nonhumans by those whom I can only conclude are deeply damaged and psychologically sick, to images and exposés of the callous disregard for the sanctity of life that is standard practice in any part of the process known as ‘farming’, the process that brings sentient beings into the world to use as resources, to atrocities too many and varied to contemplate. Every day we see images of torture, images that brand themselves forever behind our eyelids and haunt our sleepless nights.

These images can rock our worlds and can drive us to despair if we let them. When my eyes first opened to the truth of my species’ unspeakable obsession with wreaking death and havoc on all other species while steadfastly congratulating themselves on their ethical awareness, like most of us, I had no filtering mechanism. The images kept on coming and somehow it felt like I had a perverse responsibility to look at them, out of respect for the suffering, as a sort of penance for the actions of my poor deluded species, and my own behaviour in the past. Every day my heart was shattered until eventually I reached several conclusions.

The place changes, the faces change, the date changes but the theme is always the same. Sure, everyone needs to know these images exist but they are unchanging and they can never change because there is no good, or even mildly acceptable way to use other individuals when the whole concept of what we as a species do to use others as commodities is wholly unnecessary and morally unjustifiable. If we have to use the word ‘humane’ in connection with any unnecessary process or action we support – and all our use of others is unnecessary – then it is almost certainly morally unjustifiable.

It is not how we use other individuals that is the problem. It is the fact that we do it at all that is the real issue that we all need to focus on. The horrific images and the videos are all variations on a theme and that theme is rampant speciesism.

Often, the images are shared in a sort of shocked and helpless outrage, to which the expected response is shared outrage. This does not help anyone, least of all our victims. If sharing such horrors, we need to offer viewers a way to be a real and tangible part of the solution. That way is by ensuring that everyone who shares our outrage knows that the very least they can do is to become vegan.

Although I used to, I no longer support petitions and single issues and I have documented my reasons for this in a previous post. I know, however, that many do support them and it is frequently in connection with this sort of post that petitions are circulated.  I can’t stop people sharing petitions, but I would make a single plea in this regard.

We must always make it crystal clear that signing petitions isn’t some ‘less extreme’ form of activism that our audience can participate in if they want a salve for their conscience while continuing to support nonhuman use in their own lives. If we think about it, it is utterly pointless to sign a petition against a single type or instance of nonhuman use, while every aspect of our own lives continues to perpetuate other types of nonhuman use. Signing petitions is no substitute for being vegan and veganism truly is the least we can do.

Being constantly sickened, sorrowful and grief-stricken did not change my underlying goal, it simply incapacitated me. Despair can turn our thoughts inwards, to contempt for those whom we see harming those of other species, to violent thoughts or even hatred and xenophobia. When this happens, we are completely forgetting where most of us began, as full and oblivious participants in the system we now strive to end. The persecution of helpless nonhumans by our species is a global issue and there is not a single nation in a position to be critical of any other.

We need to remember how resistant we all were to the realisation of the impact of our nonveganism and remind ourselves that violence and hate are seldom effective tools with which to advocate justice, respect for life and nonviolence.

Acceptance of the unthinkable

One of the hardest things we all have to come to terms with, is that we cannot save all those individuals who are currently in the exploitation ‘system’. It’s just not possible. This is extremely difficult for us because we all like to act. Doing ‘something’ seems so much better to us than what we might see as doing ‘nothing’. We can rescue individuals and we can support places of sanctuary for those fortunate few who escape their fate, but we can’t save them all, because it’s just not in our power.

So who does have the power to save them? The exploitation industries? The processing plants and slaughterhouses? The ‘food’ manufacturers? The shops and supermarkets?  No, none of these. All of the above are simply the mechanism feeding the ravening monster that is consumer demand. Consumer demand is the driving force, driven by rampant speciesism and mistaken ideas of necessity and entitlement. Those helpless billions who are currently in the system, whose lives are over long before their blood pours through their gashed throats onto the killing floors, who are waiting to be used up, waiting in line to be tortured and killed, are there because the level of consumer demand ensures that those who make their livelihood by providing what consumers want, are able to do so in a financially advantageous way.

To be really effective advocates, we need to select our target carefully.  It’s not even a question of how we can make best use of our time, it’s about choosing the target that will strike at the root and actually bring the whole horror show to an end. That target is nonvegan consumer demand.

By encouraging ordinary everyday people to recognise the enormous power that they wield through their everyday choices as consumers, and by urging them to realise how nonvegan choices are in direct conflict with the way most of us think of ourselves, we can gradually end the demand and remove the financial advantage that makes the execution machine keep on going.

By asking humans who are just like we used to be, to consider the extent to which we have all allowed speciesism to dictate our nonvegan behaviour, we can actually make a real difference to the way individuals of other species are regarded by humanity. We can’t give anyone a one-line answer to why we should all become vegan, but we can perhaps hope to trigger in individuals an urge to seek the truth.

Being the best we can be

And so, about two years ago, I made a decision. I decided that I would do everything I possibly could to encourage others to become vegan and I would do it with all my strength and commitment. In doing this, I acknowledged that the images of torture, heartbreak and the vile and unnecessary excesses of humanity would always be there but I no longer wished or felt compelled to see them. None of them would change my goal, make me feel any different, add to my commitment or serve as a reminder of a cause that is with me every moment of every day.

I sincerely believe that once we shed our speciesism, we can excuse ourselves the constant exposure to the nightmare in order to be more effective. By doing our absolute best, holding nothing back, every single one of us can be an effective advocate for the billions who depend on us – even if all we do is stand as an example to others. We can’t save those in the slaughterhouse today, but we can most certainly try to save their descendants from ever being brought into a world that sees – not who they are as sentient individuals  – only what we can take from them in blood and violence.

Let’s be vegan and keep trying our best.

9 Responses to Dealing with the nightmare