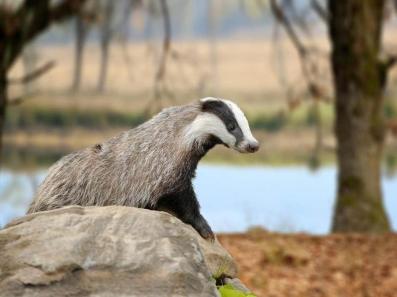 Cull.  We see the word applied increasingly to the mass killing of numerous species; to deer and to foxes and to seals, to pigeons, crows and even swans. The word is in the news at the moment, being applied to the mass slaughter of an anticipated 63,000 badgers, an indigenous wild species in England, one of the countries that make up the UK. The stated reason is an effort to curb the spread of tuberculosis in herds of bovine victims being cultivated to meet the demands of nonvegan consumers. In other words, this particular atrocity links back directly to nonveganism.  As nonvegans, the majority of the very people who are so outraged and so vocal about this admittedly outrageous decimating of the population of wild creatures, are the very ones on whose behalf it is ostensibly being perpetrated.

The science about whether this wholesale bloodbath has the desired effect remains controversial. Nevertheless as with everything else in a society that elevates animal agriculture (the practice of needlessly creating victims out of unconsenting and defenceless individuals while destroying the planet and exacerbating the risk of disease in humans) the precautionary principle that would rein in the excesses of hunger for profit in any other sphere, is overruled thanks to the political and financial clout tied into the huge subsidies that the animal use industries reap from the public purse.

‘Cull’ is a word that’s somehow typical of our dishonest species. It’s a word that seeks to convey tones of benevolent husbandry, implying care and bucolic concern towards a natural world that somehow just can’t seem to balance itself without kindly intervention from our species.

Really such euphemistic posturing is just a feeble attempt to dignify the unforgivable, to cloak the brutality, the egotism, the delusions of superiority and the lust for blood and money of a species that has lost all semblance of decency. What’s happening in almost every case is an eradication of one (usually wild) species from their natural habitat, in order to clear the way to make money from cultivating the victims of nonveganism.  It is carried out to perpetuate the profit-making potential of the regime of forced reproduction, of using to death and finally slaughtering in cold blood, of the innocent individuals of nonhuman animal species who have been selectively bred to make money for a brutal industry at a catastrophic cost to their own wellbeing and their birthright to live free from our absolutely needless violence.

If this flagrant destruction of the few wild species that remain disgusts us – and it should – we must begin by stopping our personal participation in the system that drives these atrocities. We do that by becoming vegan. What we do next is up to each of us. Be vegan.

6 Responses to Looking at language: Cull