Posted on December 5, 2017 by There's an Elephant in the Room 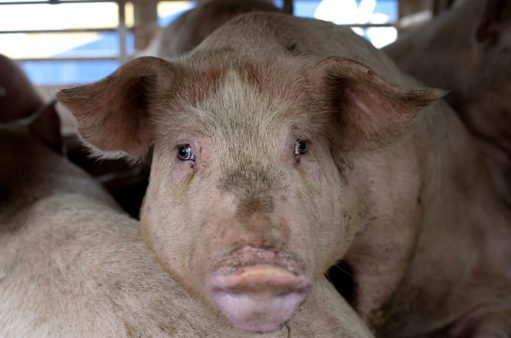 There’s an Elephant in the Room promotes veganism and never anything less. There are dozens – if not hundreds – of posts and essays linked to the page that seek to clarify this point but they all boil down to one thing:

To condone any position that falls short of veganism is actually promoting harm to someone.

EVERY variation in our behaviour that stops short of being vegan is literally selling someone down the river, compromising their basic rights and signing their death warrant. There is no getting round this. It’s a fact.

Recently, I noticed that someone had commented on one of my posts to say that if people couldn’t be vegan, they should at least ‘just go vegetarian even if it’s just for Christmas week’. Now this is so completely at odds with the message of the page that I have been turning the idea in my head, trying to find a neat analogy that would explain why. I came up with this…

Imagine you are a parent. Every day your child comes home with their clothing scuffed and torn, every night they wake sobbing in the early hours, every morning you watch them pick at their food. You have no idea what the problem is and they can’t or won’t give you any explanation. At first you put it down to just normal rough and tumble, difficult school work, maybe coming down with a bug. You rack your brains to find a way to help them, getting increasingly anxious. Until one day it suddenly all becomes clear. You find out that your child is being bullied. All their symptoms fall into place with stunning clarity. What do you do?

Even those who are not parents will have a view on this. I know I do – from painful experience. I’m sure I’m not alone in doing the first one and would not even have considered doing anything less. Why? Well it seems so obvious, doesn’t it? Because our child whom we care so deeply about is being harmed and tormented, because they are relying on us, and because it’s just plain wrong; there’s not a single valid reason for it to be happening.

So – to relate this to the vegan issue

When we are not vegan, we use defenceless individuals of very many species for our own trivial and unnecessary interests – that’s basically what it IS when we refuse to be vegan. This means that we completely disregard our victims’ interests – in some cases even convincing ourselves that they don’t have any – in favour of our own. I have seen nonveganism likened to bullying and have always thought that to be an overly gentle way to describe what amounts to brutal and unrestrained violence.

However one day it all becomes clear. Like the bullying in the previous scenario we suddenly understand what is happening and we realise that using the lives and breaking the bodies of other individuals is just completely wrong in every way. Seeing this, we have no choice but to become vegan ourselves, because this is the only way that we can stop actually participating in the harm that we now realise is completely unnecessary. And then some – if not most – will go on to be activists. telling others about the injustice of nonvegan behaviour towards our fellow earthlings who just want to live unharmed.

So, when we’re telling others:

What’s the message that these two choices are giving out?

The first is clear, unequivocal and leaves no room for doubt. As with many other issues of right and wrong, it’s clear cut and beautifully simple. When something is wrong, we want it to stop. That’s how it is when things are important, and for our victims, their lives are at stake. How much more important can an issue be?

The second suggests that this isn’t all that important at all. That at its core, using other individuals isn’t all that wrong and while we’d perhaps like it to maybe happen in a different way, or to a different species, we’re not making a big thing of it.  It doesn’t challenge or change the mistaken beliefs that we have all grown up with: our myths of supremacy, of entitlement, of necessity. It just asks us to tone down our behaviour for a week or so.

And what is even worse, by allowing us to consider that this is actually doing some sort of good, it is encouraging us to actually feel good about ourselves for our restraint and our self sacrifice.

And while we are busy congratulating ourselves and planning our menus of flesh, eggs and milk products for when our period of abstinence is over, it does NOTHING for those who are quaking in the slaughterhouses, in labs, in zoos and in our many types of hell. As they will continue to do until the world goes vegan.

It’s so simple. Be vegan. That’s all it takes.

4 Responses to Bullying – an analogy