Egg use by humans – a look at whether it’s humane. 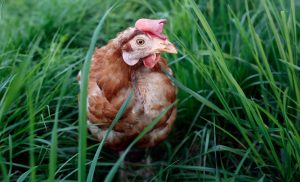 Image by Andrew Skowron is of Magda, rescued from use as an egg machine

Today the first post I saw was about hens who had been used for eggs and it tore my heart out. I should have known better and not looked at the comments, but I did and guess what? There they all were, the inevitable pro-backyard, ‘know-where-your-food-is-coming-from-and-be-compassionate-like-me’, ‘from- the-lovely-woman-down-the-road’, ‘treats-them-like-her-children’ comments; comments that refuse to acknowledge that the fundamental principle of egg use is wrong, commenters determined to claim that the way they personally use hens is exceptional, so whatever message is being conveyed doesn’t apply to them.

Why is that? Seriously? Why are there so many people who imagine themselves to be ‘animal lovers’, who point-blank refuse to accept that using hens is simply wrong and insist that what they do is perfectly fine? Years of blogs, high quality shared links, science, expert analyses, heart wrenching photojournalist pieces, images, numerous educational sanctuary narratives and the sickening statistics have no impact at all. It’s like hitting my head off a wall.

Okay I give in

So, here’s another way to look at it. I’ll give in. Let’s just say that the ‘exceptional circumstances’ advocates are right and I’ll take it from there. Someone, somewhere, has found the only decent way on the planet to use hens for eggs, and has also found the only hens who understand the transaction required of them, and have contracted to hand over their eggs in return for food and shelter. I’m always hearing about how happy and content these hens are, so clearly that would indicate consent, and it’s all about consent, right? Do the hens consider themselves employees, or victims, or family? I’m guessing again, but I’m sure the commenters would say ‘family’ so let’s just go with that.

Just in case anyone thinks this is uncharacteristic and I’m being a pushover here, I’d also suggest that obviously the exceptional circumstance advocates must be capable of some form of advanced communication to have established the terms for this contract. Why? Well, humans are notorious for misreading the traditional methods that both humans and members of other species habitually use to communicate their wants and needs. For instance, a species that can – amongst other examples too numerous to list – interpret CO2 stunning as ‘humane’ from observing the intense screaming/individuals actually tearing their own feet off in their attempts to escape.  A species that believes it’s very plausible that those whose dead flesh lies in chunks in the mortuary aisles and whose flayed skins, wool and feathers adorn their bodies and furnishings were, as the cartoon pictures and jolly slogans on the labels assured them, ‘happy’ and ‘free’, is possibly somewhat lacking in the department of vocal and body language interpretation when it comes to run-of-the-mill stuff like refusal to cooperate, exhibiting distress, or indeed pain and terror.

Anyway. In this instance we’ve established that that we have an exceptional human/hen contract – or several, because there is someone on almost every single post and blog. This means there must be an unknown number of humans who use hens for eggs and a number of hens who are okay with the deal. I’m not sure about how many we’re talking about. I’m guessing not many, but admittedly that’s only because I’ve never actually encountered any of them personally. Even several hundred million would be no more than a drop in this particular ocean, however.

Since they promote it, these humans must necessarily buy in to the principle that using other individuals for their bodies, their lives and the result of their reproductive processes is morally acceptable. Clearly this is a complete rejection of animal rights and veganism, but if the people and the hens – PARTICULARLY the hens – are happy, and as long as no one is claiming to that the arrangement is representative of veganism, OR that their arrangement aligns with the principles of animal rights, then it’s difficult to argue. Sadly, the world is full of nonvegans. I’m not going to examine the contract details further.

So are we done with this conversation?

Is that the end of the matter then? Am I going to shut up? Well, no. It really isn’t as easy as that.

I’m honestly never sure what the ‘humane use’ advocates are hoping to achieve with the denials and contradictions. On one hand they clearly consider what they are doing is okay but where does that lead? Are they saying their way is the way everyone should be doing it? Or are they saying that they’re the only ones who should be allowed to do it and everyone else should stop? Leaving aside questions about where the exceptional hens are sourced, what happens to them when their bodies are no longer able to keep up their end of the deal, veterinary treatment costs and a host of other issues, I’ve read lots about how exceptional-circumstances advocates frequently distribute surplus eggs to others ‘to reduce demand’ for other types of egg production.  In other words, as humans who clearly promote egg consumption, their customers are being reassured by them that bird eggs are;

(a) an appropriate food for humans, that
(b) there is no problem about this as long as it’s done in a particular way but that
(c) other production methods do exist for which demand is to be discouraged.

This is where I need to highlight a number of uncomfortable facts, including scale and the focus of consumer demand. As an animal rights advocate, I shall leave it to others to denounce the suitability of bird eggs as human food.

Tearing our focus from the exceptional few, and excluding the billions of members of numerous other avian species who are subjected to the same ordeal, let’s remember that there’s a global flock of approximately 8 billion individual hens (presumably minus contracted individuals and similarly exceptional hens) trapped in a regime that uses them mercilessly for their eggs, until  they are sent to a slaughterhouse. Intimately connected to that, are approximately 8 billion male chicks who are macerated or suffocated annually within a day of hatching because they will never lay eggs. as well as breeding facilities where hens with no hiding places exist alongside roosters, laying drawers full of motherless eggs to await hatching in temperature controlled store rooms. There’s also ongoing industry-funded research working tirelessly behind the scenes of the ‘happy farms’ to make hens lay more eggs, bigger eggs, in less time, for less food, in smaller spaces etc. None of these aspects can be ignored.

In other words, there is an extremely big picture here, affecting uncounted billions of defenceless birds every year. Each one of these individuals is subjected to an unspeakable ordeal that deserves our recognition and action. It is unthinkable that the real, documented and undeniable experience of the majority COULD ever or SHOULD ever be erased by those who promote the use of an exceptional few.

It occurred to me that a claim to be exceptional is double-edged. On one side is a claim that, in direct contradiction of every currently credible source, a hitherto unrecognised consensual means of exploitation exists. But on the other side is an acknowledgement that the status quo is something to discourage, given so often as a justification for distributing backyard eggs.

So why is it that apart from industry propaganda, the contradictions scattered across social media animal rights pages all come from individuals who for whatever reasons are so keen to justify egg use? Why don’t we find passionate people on blogs like this, promoting this alleged consensual use while addressing the philosophical, technical, practical and operational issues connected with nonveganism, linking to science and impartial experts without vested interests in animal use?

Why don’t we see well thought-out proposals about how all these billions of egg-layers, their parents and siblings may be accommodated on our flooding blazing, suffocating planet, in comfort and respect, with space and sunshine, freedom and dust-baths, companionship and retirement plans and all the things every chicken needs? Why is it that only vegans and sanctuaries talk of hatcheries and selective breeding and slaughterhouses, of the burden of hyper-ovulation, of hormone implants, and the recognised endemic diseases arising from exploitation?

And then, there’s consumer demand

There’s a big (enormous) picture here and it applies to every single type of exploitation, whatever the reason and whatever the species.

Even IF that ‘exceptional’ way to farm lives, bodies and reproduction in a morally acceptable way has been found, it’s not rocket science to realise it wouldn’t come cheap for it to become generally adopted. But as consumer demand always focuses on the cheapest option, any level of sanction for the principle of exploitation will ALWAYS lead directly to the worst, the most brutal and the most exploitative method of production. As long as our species clings to the idea that other animals exist for use as our resources, why wouldn’t consumers opt for the cheapest option? It’s the way the world works.

And that’s why every ‘animal lover’ who condones any degree of exploitation, automatically reinforces the legitimacy of consumer demand for that substance or service. For example, someone who presents themselves as an ‘animal lover’ while eating and/or using other animals of one or more species, conveys a message that it’s not the principle of exploitation that’s wrong, it’s how it’s done/who is doing it/the species affected/the country where it happens etc. There are countless nonvegan ‘animal lovers’ out there broadcasting that message and wherever it appears, it’s the most utter betrayal of our species’ trillions of land and aquatic victims.

These unfortunates are still queueing or sitting in piles of crates in the slaughterhouses quaking and whimpering in dread of things most humans can’t even bear to educate themselves about; they are still being dragged, suffocating and bleeding from the oceans and sea pens; they are still behind bars in the zoos and the labs and the hell holes we’d rather not know about.

Did it help to give in?

So here I am. Clearly I’m sceptical about the existence of ‘exceptions’ and I won’t pretend otherwise but I’m back in the same place as usual. Because even if it were true that consensual exploitation is a possibility, the bottom line is that when we are not vegan, the very fact of our acceptance in principle of nonhuman exploitation, means we are personally responsible for the worst, most depraved, most sickening barbarity that occurs to meet nonvegan consumer demand.

And yes. That includes using hens for eggs. It ESPECIALLY includes hens in an escalating egg market. Like every victim of our species, the least we owe them is to speak out against the atrocity of nonveganism in a world where the majority of humans are not being exposed to the concept of animal rights or the veganism that is the inevitable consequence of accepting it.

There are far too many humans who are only too willing to listen, without engaging any critical thought, to the pro-use, ‘know-where-your-food-is-coming-from-and-be-compassionate’ nonvegan advocates.

And we ALL know who loses out every single time that happens.

4 Responses to Egg use by humans – a look at whether it’s humane.