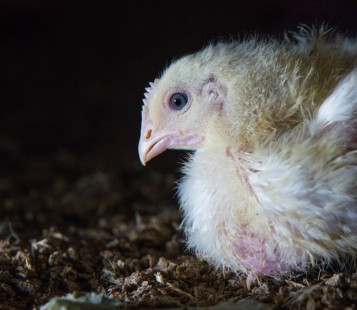 Image by Jo-Anne McArthur / We Animals

The word ‘chicken’ has come to represent a cooking ingredient. Despite – or perhaps because of – a world where information has never been easier to discover, those with vested interest in making money from using animals, and the powerful advertising propaganda they wield to ensure their continued profitability, have become more ruthless than ever before. No one is ever encouraged to understand the consequences of their demands as consumers, particularly when these consequences run counter to every single value that the majority of people believe that they hold. In adverts and programmes on every available form of media, in stores, and in restaurants, a steady stream of soothing reassurance veils the grotesque trade in suffering and death with a carefully constructed facade of acceptability. ‘Everyone does it. Everything is fine. Don’t worry. We’ll keep selling if you keep buying.’

Chicken. That cookery ingredient in the mortuary aisle; bags of wings, bags of legs, bags of breasts, halves and quarters, fillets and drumsticks, livers and hearts; emblazoned with reassuring labels that use words like ‘happy’ and humane’ and ‘freedom’, labels boasting about ‘welfare’, about ‘quality’ and ‘freshness’.

It’s so clinical, isn’t it?  With our use of others so normalised by incessant reinforcement, so complacently unchallenged and accepted by the majority of consumers, it is as if the misery, the gore and the screaming had never even existed. Most seem oblivious. The majority of those who use the word ‘chicken’ are thinking of recipes, of sauces and accompaniments.

The very first time we decide to look at the facts behind the ingredient, requires a conscious effort of will; a determination to reject conditioning that we have possibly not been aware of up to that point, the courage to face the truth.

So let’s make that effort of will to really see the body parts in the supermarket mortuary aisle as it is or was; not ‘chicken’ the ingredient, but chickens as individuals. Let’s look back a few days in time to see them alive; warm, sparsely feathered, blue-eyed, quietly cheeping babies, each one motherless, hatched in a temperature-controlled drawer in a hatchery, transported to endure their entire existence in a sunless ammonia reek with thousands of other motherless infants.

Let’s see them in our mind’s eye as they were; panting open-beaked with distress, being packed into crates and stacked high on road transports, fleets of them, shuttling in and out of our slaughterhouses, day after day, hour after hour. There is a miasma of dread hanging over a slaughterhouse as the transports park precisely in the diesel-fumed yard, alongside waiting and empty refrigerated vehicles.

Let’s focus in on these stacked crates, on these small individuals; these tiny, trembling creatures, sick with unimaginable terror, helpless babies huddling together for comfort. When we allow ourselves to truly see, we can feel the pounding panic of their infant hearts; we can sense their utter desperation; the crushing futility of their feeble, fluttering struggles against implacable hands as the bowels of hell yawn to receive them. 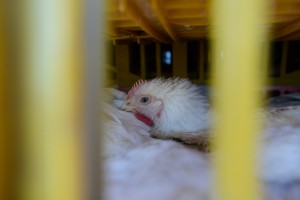 Image by Jo-Anne McArthur, We Animals

To the accompaniment of whirring machinery, hurrying hands abruptly whisk each small individual from the meagre comfort of quaking bodies pressed together, trying to hide.  Suspended side by side with their friends, hanging splay-legged from shackles for easier disembowelling, powerless to escape the gut-churning journey into contraptions from the darkest reaches of the depravity we humans inflict on our sentient kin.

Baby chickens. At the hands of our species they each know pain and fear in a way we humans hope never to experience. How could the mechanised slaughter of innocent creatures be any other way?  Finally every trace of their minds, their memories, the very essence of each unique personality is gone, erased with their heartbeats and their gasping breaths; sliding sluggishly down gore filled drains. Only echoes and the stench of fear and entrails remain, as the shrink-wrapped packages emerge.

And so they now lie, pale and motionless in the supermarket mortuary chill, contorted, headless, footless, dismembered.  Each small corpse a tragedy, an individual tale of a life that was never lived. 42 days from egg to slaughter is not a life. Yet despite that, it was all these babies had.  They had absolutely nothing else to call their own.

It is of no relevance whatsoever what the labels say. They say exactly what they need to say to make the uninformed part with their cash. It is only when we look behind these labels to the truth, we see that they mask unspeakable violence, fear, and agony. And these are the completely inevitable consequence of choices that require others to pay with their lives for our convenience. The only way we can stop being the consumer whose demands are insisting on the nightmare, is to be vegan.