‘Hardly ever’ and ‘only a drop’: why animal suffering is not scalable

Posted on September 5, 2016 by There's an Elephant in the Room 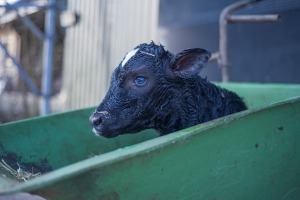 How often do we hear it said, ‘I hardly eat any meat’, or ‘I only take a drop of milk in tea’? It is as if we consider that the level of misery that we demand as consumers can be scaled down by such reductions.

This view occurs because we refuse to see our victims as individuals. Yet for the individual whose pitiful life was cut short in the gore and terror of our slaughterhouse so that we could have have that morsel of their desecrated flesh, the world ended a few days earlier. The only life they had has been taken from them, however we seek to downplay our role with smiles and shrugs. Their horror and their fear, their desperate struggles against the hard hands with their knives and saws, were no less for our trivialising. Their despair was not in any way lessened as the electric prods forced their faltering steps onto the kill floor.

For that ‘drop of milk’ that we smilingly seek to excuse as a trivial indulgence, a mother was pinioned and violated. For nine months, her womb nurtured her growing child while almost every day her swelling, mothering body was hooked up to our mechanical suction pumps. And when her time of labour came, as with any other mother, she knew the wrenching, draining, convulsions of her child’s birth; she cried out, bearing down as nature’s tides gripped her body in her toil, and her pain was no less than it would have been had she known she was doing it for the sake of all humans who ‘only take a drop in tea’.

Her body still trembling from the exhaustion of giving birth, her anguish and her frantic fear as her infant was taken from her, were in no way lessened by how often or how much of her milk we, as individuals, take. Her loss and her anguish were devastating; her broken calls to her new-born child were heartrending. Her infant’s sobs of fear and bewilderment, his futile whimpers for his mother’s milk and comforting warmth were not in any way consoled by our trivialising. His imminent death will be agonising and he will be more afraid than we can even imagine.

When we refuse to participate in this nightmare for another moment, is the point at which we stop being nonvegan. Please make that moment today.

14 Responses to ‘Hardly ever’ and ‘only a drop’: why animal suffering is not scalable