Vegan and vegetarian – why they are not similar

Posted on November 7, 2015 by There's an Elephant in the Room 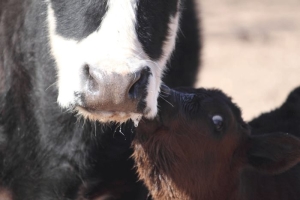 I’ve written on this subject before but it definitely bears repeating. I used to eat a vegetarian diet and although I eventually became vegan, eating that vegetarian diet was not ‘part of my journey’, or ‘a step in the right direction’, or ‘raising my awareness’ because my awareness was utterly dead in the water, wallowing quietly in the misplaced confidence that the donations I sent in return for the horrific images in the mail were helping to ‘stop cruelty‘.

No, being vegetarian did not lead me to veganism and I’d still have been vegetarian to this day were it not for Facebook. I became vegan because I stumbled across information that taught me that because I sincerely cared about animals, I logically had no choice but to be vegan. It’s as straightforward as that. Vegan education was what it took.

The decision to become vegan is a light bulb moment of clarity in which we realise that every area of our life up to that point has been built on using, on taking, on destroying, on harming and killing. In that moment and in the time of grief and horror which follows it, we realise that – as if such wanton horror was not enough – the majority of those whom we’ve been oppressing are helpless, innocent, vulnerable, trusting and like us in every relevant way. Becoming vegan is simply making the decision to stop hurting them for our self-indulgence. We harm or we don’t. It’s a binary thing.

(Please note as always I must stress that this post specifically excludes any temporary changes we make in our lives during the period when we have decided to become vegan and are going through a phase of transition. During this period, each of us finds our own way to incorporate the practical aspects of veganism into our lives, a process that depends on our individual circumstances but is generally of limited duration.)

When we see the words vegetarian and vegan conflated (combined as if they were closely related or a single concept) they should make us pause and consider. Veganism is an ethical stance and vegetarianism is a dietary restriction. So what….? Well, ethical stances and dietary restrictions are not necessarily related – even superficially – and this is never more true than when vegetarianism and veganism are mentioned in the same breath or the same sentence, despite the letters that they share.

Now I know that at this point, many may be firing up their keyboards angrily to inform me in no uncertain terms  that for them personally, being vegetarian somehow led them to become vegan. All I can say is, ‘Good’. However their experience is not the norm and I have read far too many posts, too many justifications and yes, sadly, too much vitriol from those who have been told that vegetarianism is somehow ‘helping animals’ by ‘reducing suffering’ and are determined to defend it to the death. Literally, to the death, the death of billions of helpless and vulnerable individuals.

At this point I want to stress, very sincerely, that I am not condemning those who – I choose to hope – comprise the majority of the vegetarian population. I, too, used to be vegetarian and a very honest and ethical vegetarian I believed myself to be. The plight of animals tormented me. I was a supporter of every single issue and petition I could find and I genuinely – for some completely-inexplicable-to-me-now reason – thought that milk and milk ‘products’, eggs, honey, wearing wool, leather, feathers, either did not cause the death of the rightful owners, or alternatively were obtained as by-products of a process that was a ‘necessary evil’.

Walking on the wild side

I suppose that on reflection I still bought in to the myth that consuming the dead flesh of other beings was necessary for optimum health but that as a vegetarian I was ‘walking on the wild side’, finding alternatives that somehow kept body and soul together although I totally believed the hype that this was a rather radical and far-from-optimal choice.

Sadly this completely incorrect view is still perpetuated by many who should know better – and I unfortunately must include within that number, many health professionals whose professional development seems not to include updating their knowledge with the recommendations of health authorities across the globe. Be that as it may, the billions of sentient individuals, millions of whom face death each day for our deluded fantasies of necessity and entitlement are the focus of my message, and they will remain my focus until my dying breath.

A walk down the mortuary aisle 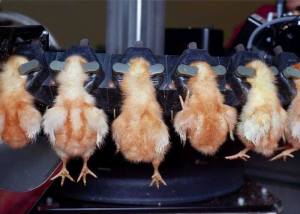 Debeaking infant chicks destined to an existence of confinement as egg layers.

There are some who term themselves ‘vegetarian’ whose diet is strictly plant-based. However, the definition of the word provided by the ‘Vegetarian Society’ is – unfortunately – the standard which the majority of suppliers of ‘vegetarian’ food seem to follow. This is particularly true of supermarket chill or freezer cabinets where packaging will frequently announce that ‘free range’ eggs have been used, or ‘organic’ milk. Going by the definition above, even as a consumer of milk products and eggs, one is clearly entitled to call oneself vegetarian even though milk and egg products are very obviously not vegetables.

The other phrase within the definition that I’d like to draw attention to, is ‘by-products of slaughter’. As a ‘vegetarian’ I was not even aware that this definition would have excluded from my diet all my favourite gummy sweets, jellies, desserts and many other products containing gelatin. Perhaps I was unusual, but I rather suspect that this restriction is not recognised by the majority of those who choose to call themselves vegetarian.

However many substances such as eggs, milk, honey, wool and feathers – to name a few – are not technically ‘by-products of slaughter’ in that their legitimate owner is not dead when the substances are taken from them although for some their agony in the process of our ‘harvesting’ these substances is so great that I would not be surprised if they wished for death.

Satisfying consumer demand for these ‘products’, however, is the direct cause of billions of innocent creatures being brought into the world to be confined and used throughout their miserable existences. Their bleak and pitiful lives will end in the horror of the slaughterhouse once their commercial viability wanes. The entire production of eggs and milk in particular is predicated on the unspeakably brutal manipulation of the reproductive processes of helpless individuals. These defenceless innocents are mostly female but the reproductive systems of a large number of males are mercilessly used too.

From the cradle, at first via our parents and then as inquiring adults, we are fed nonsense in the media about the dietary necessity of milk products and eggs and how ‘natural’ it is. Once we realise the truth, it is hard to conceive of a more unnatural concept than that which underpins the dairy and egg industries. Adverts pimping dairy and egg products proliferate in every branch of the media. The scale of the falsehoods is utterly staggering. We see over-the-top and mendacious depictions of happy cartoon cows, bearing not even a trace of the reality about their repeated violation and forced pregnancies (9 months, like human pregnancies). We hear no mention of the traumatised mothers and terrified, lonely babies sobbing for each other as they are separated soon after birth, the infants bound for slaughter as veal or slavery to replace their worn out, pumped out mothers.

As a former nonvegan, I appreciate that the previous paragraph would have made me uncomfortable. I would be beginning to take refuge in the frequently repeated  defence that goes, ‘Everyone is doing it and if it was as bad as this crazy woman says, it would be against the law’. Because you see we all think that. We all want to be assured that we’re not making bad things happen to the helpless and vulnerable. We all cling to the belief that there are laws protecting animals. We all cling determinedly to the assurances of the big ‘animal organisations’ that they’re ‘doing something’ to stop ‘cruelty’ with those donations you so kindly sent them. But they missed something out, they forgot to tell us the whole story.

They missed out the part that would have told us that the ‘cruelty’ is part of the whole concept of farming living mothers, living fathers, living children. They should have mentioned that these gentle beings are sentient, living, feeling, aware and desperate to protect their children and each other; that there is no way to take and kill their children so we can hook them up to milk pumping machines, there is no way to hack open their throats and let them bleed to death so they can be skinned, dismembered and their body parts sold ‘in a nice way‘.

Masking the violence, comforting the concerned

In essence, I contend that the definition of vegetarianism simply reaffirms and legitimises the speciesism that allows consumers to continue to perpetuate unspeakable harm and suffering upon chickens, other egg ‘providers’, cows, sheep and goats. It deliberately disregards the violence that is the backbone of any industry that commodifies sentient beings as human resources. It is particularly upsetting that these products are being sold to many who try so hard to be ethical consumers and who carefully avoid consuming the flesh of the dead.

And that is the crux of this outrage. Since I became vegan, I have met numerous others who used to be vegetarian, the vast majority sincerely believing that they were doing a good thing, but who became vegan as soon as they were told the truth behind the horrors that their vegetarian diet was continuing to cause to billions. Almost without exception, every vegan wishes that they had never heard of ‘vegetarianism’ and they definitely wish they had never participated in it.

I have no doubt that there will be many who are waiting for the end of this post so that they may comment to repeat the myth that being vegetarian is ‘a step in the right direction’. I’ve heard that one so often and it’s simply not true. The following section first appears in a previous post about vegetarianism and it illustrates why this diet of morally inconsistent restrictions is not helping anyone, least of all those who are waiting in line in the slaughterhouse, whose throats are about to be hacked open and for whom tomorrow will not come.

The victims of vegetarianism

The following is not an exhaustive list. Even assuming that all food-related ‘by-products of slaughter’ like gelatin and isinglass are avoided, vegetarianism, by its very definition, does not protect:

Now it’s up to the reader

So there we have it. If I had read this post 40 years ago, my life would have been a very different one. I sincerely hope that I would have chosen to become vegan instantly, but none of us can ever know for sure until the light bulb moment occurs. In the end, as I have often written, we must each face ourselves in the mirror and with our conscience as our guide, our judge and our harshest critic we must do what allows us to sleep at nights. I cannot know what is in the mind of any who read this essay but all I can say is that it comes from my heart. Following extensive reading and research it is as truthful and honest as I can make it.

I choose to hope that all of us value truth and honesty. So let’s forget vegetarianism and be vegan.

41 Responses to Vegan and vegetarian – why they are not similar